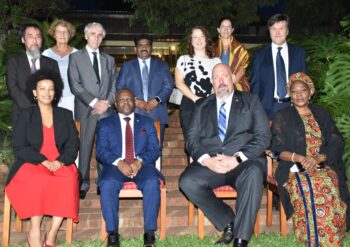 Lilongwe, December 9, 2021 – Chargé d’Affaires Jeremey Neitzke launched the Summit for Democracy yesterday by bringing together senior officials from the Government of Malawi and Heads of Mission from other participating countries.  He said: “We are pleased to partner with the Government of Malawi to defend and strengthen democracy in our countries, and we welcome His Excellency President Lazarus Chakwera’s participation in the Summit.”

Also yesterday, U.S. Secretary of State Antony Blinken announced Anti-Corruption Bureau Director General Martha Chizuma as an Anticorruption Champion, one of only twelve honorees globally.  Chargé d’Affaires Neitzke remarked: “The United States recognizes the great progress the Government of Malawi has made in the fight against corruption.  DG Chizuma’s award is recognition of not only her great courage in standing up against corruption in her professional capacity, but of the institutions and structures in Malawi that make investigation, prosecution, and conviction of those guilty of corruption possible.”

Corruption erodes public trust in government and democratic institutions, deepens poverty and inequity, and stifles opportunity and growth.  It affects people in virtually every aspect of their daily lives.  That is why President Biden designated the fight against corruption as a core U.S. national security interest, and why combating corruption is a central theme of the Summit for Democracy.  The Summit is a chance for all of us to learn from one another about what works best in fighting corruption, where we are falling short, and how to work together to address the shortcomings.

The virtual Summit for Democracy will bring together over 100 participants representing governments, civil society, and the private sector, to focus on challenges and opportunities facing democracies around three key themes: defending against authoritarianism; addressing and fighting corruption; and promoting respect for human rights.  Participating countries will work together during the Year of Action to fulfill their commitments and develop new pledges and initiatives that can be announced at a second Summit to take place in approximately one year.

For more information about the Summit for Democracy, including a participant list, please visit https://www.state.gov/summit-for-democracy/.