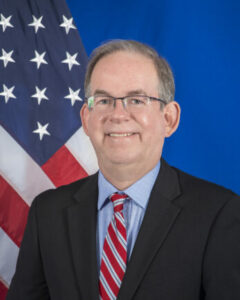 U.S. Ambassador to the Republic of Malawi

A Foreign Service Officer for 32 years, Ambassador Young previously served as Deputy Director of the Office of the U.S. Special Envoy for Sudan and South Sudan; Executive Assistant to the Under Secretary of State for Civilian Security, Democracy and Human Rights; a Pearson Fellow in the House of Representatives; Public Affairs Officer at Embassy Guatemala; and Director of the Office of International Religious Freedom.  His other assignments include tours in Vietnam, Panama, the State Department Operations Center, and several country desks.

Ambassador Young graduated from the University of Missouri with a bachelor’s degree in journalism.  He studied ecumenical studies at Trinity College, Dublin, Ireland on a Rotary Foundation Scholarship.  He received a Master of Divinity degree in social ethics and a Master of Arts in international relations from Boston University.

Born and raised in Kansas City, Missouri, Ambassador Young and his wife Diane Weisz Young have two grown children, Paul and Sarah.  He enjoys travel with his family, going to U2 and Coldplay concerts, and sports of all kinds, especially watching the Kansas City Chiefs football team.  He is passionate about leading teams, coaching, and servant leadership.