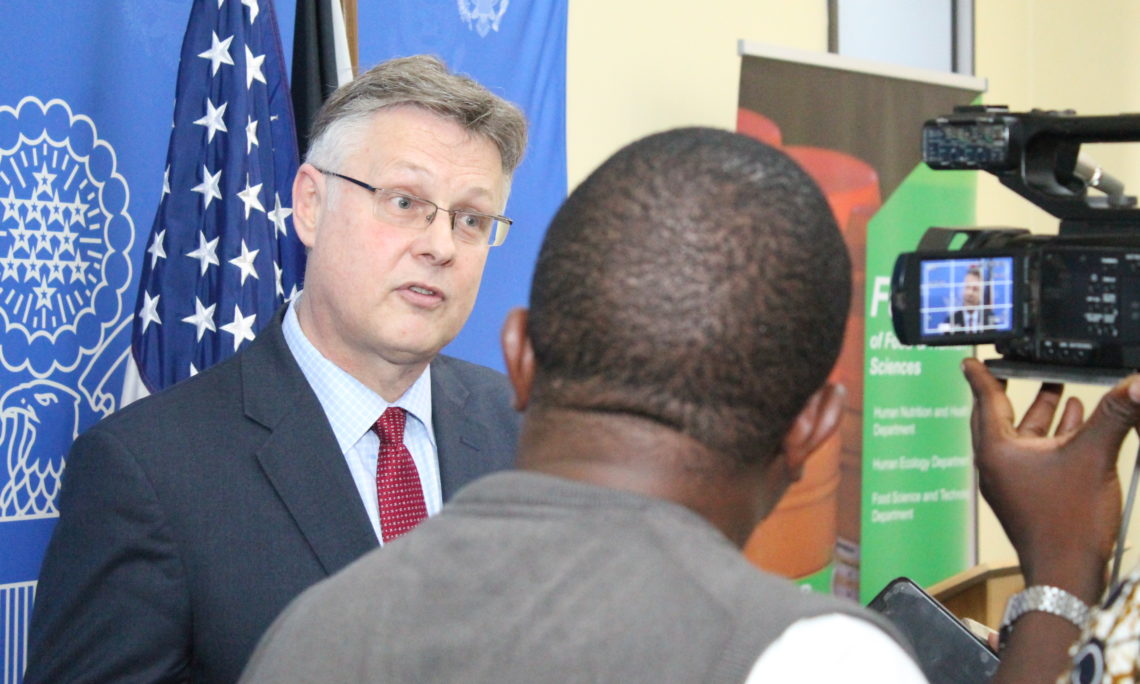 Thank you, Deputy Vice Chancellor Kaunda, for the introduction. I’m grateful to you and to everyone at LUANAR for hosting today’s event.

And thanks to all of you here today for this wonderful welcome to Malawi.  I used to visit Malawi as a child when my family and I lived in Zambia, and I can say that in many ways this trip is a return home for me.  After living in the Warm Heart of Africa, you never truly leave.

I also spent much of my career as an American diplomat in Africa, serving in Lesotho, Namibia, Togo, Zimbabwe, and Ghana.  I also worked as a Peace Corps Volunteer in Mauritania.  I am particularly looking forward to meeting tomorrow a current Peace Corps Volunteer working in a community near Salima.  The U.S. Peace Corps is a wonderful program, and the United States is proud that over 3,000 Americans have served as Peace Corps Volunteers in Malawi since 1963.

Since my youth in Zambia, I have watched Africa evolve.  Back then, a trip to the lake in Salima took half a day.  Now I plan to travel there this coming Saturday afternoon in less than two hours.  I guess I’ll find out then if Chambo is still as delicious as I remember.

One of the great privileges of my current job as Deputy Assistant Secretary of State for Southern Africa in Washington is that I can travel throughout the region meeting people like you, Africa’s dynamic youth.  You carry the great promise of Malawi’s future.  Among you are future entrepreneurs, teachers, scientists and political leaders.

Young people around the world have the same aspirations.  You want to graduate, find a good job, contribute to your family, your community, and your country.  That is what the U.S.-Africa partnership aims to achieve working hand in hand with you: A future where real prosperity is unlocked by homegrown entrepreneurs, like you.  A future where leaders, like you, prioritize accountability and governance.  And a future where our shared interests blossom into shared prosperity.

So how do we get there?  Well, today I am excited to speak to you about the growing relationship between the United States and the countries of Africa, especially Malawi.   Four guiding priorities underpin our broader engagement in Africa.  Ambassador Scott and his outstanding team at the U.S. Embassy in Lilongwe advance these goals every day.

The United States greatly values its partnership with Malawi, which faces some tough choices as it seeks to increase economic growth and reform its economy.  Which brings me to our first priority, promoting stronger trade and business ties between Africa and America.  I know that Ambassador Scott and his team are making private sector development and partnerships core to all our assistance programs in 2020.  I am sure the second Millennium Challenge Corporation compact will be a prime example of that.

It is time to leave the era of aid dependency behind and build a new kind of partnership.

We welcome President Mutharika’s commitment to “trade, not aid.”  The United States remains Malawi’s largest development partner, contributing about 3.1 billion U.S. dollars over the past decade.  We are committed to remaining Malawi’s most significant partner.  But over time, we will strive to transition that partnership to one defined by private sector trade and development.

In 2018 two-way trade between the United States and Malawi totaled 74 million dollars.  That is a low number for a country that is a beneficiary of AGOA, which constitutes an opportunity for tremendous growth.  As we celebrate the 20th year of AGOA, this year, we want two-way trade to skyrocket.  For that to happen Malawi must take further steps to create a welcoming business environment backed by good governance and must reach out actively to the international private sector, including U.S. companies.

First and foremost, a welcoming business environment requires political stability, something Malawi has enjoyed for decades.  Of late, we have seen heated rhetoric and protests overshadow years of peace.  As the constitutional court case decision is released, we encourage all sides to calmly respect the decision and find common ground through dialogue.  It is important that all sides refrain from violence while allowing the constitutional and legal processes to unfold and honoring the public’s right to express dissent.

The Trump Administration and the U.S. Congress recently created the DFC, by consolidating two corporations, one formerly known as OPIC. The DFC is now preparing to double the U.S. government’s investment capital from $29 billion U.S. dollars to $60 billion U.S. dollars – the equivalent of about 44 trillion Kwacha, offering promising opportunities for more U.S. direct investment in Africa.  With the DFC, the U.S. government will make equity investments in African companies, and we hope to use these resources to unlock billions in private capital from the United States. Malawi is perfectly positioned to take advantage of this opportunity.

Our government also recently unveiled the “Prosper Africa” Initiative.  Prosper Africa is an ambitious effort to significantly increase two-way trade in goods and investment between America and Africa.

Prosper Africa will help us expand the number of commercial deals between U.S. and African counterparts and promote better business climates and financial markets on the continent.

All U.S. Embassies in Africa have established “deal teams” to identify investment and trade opportunities, and to help connect U.S. and African companies.

Our second priority is harnessing the potential of Africa’s youth population.

Africa’s population is projected to double by 2050 to around 2.5 billion people, of which over 60 percent will be under the age of 25.

This youth demographic could be a huge benefit for Africa if African governments ensure they are educated and have professional opportunities.  If governments fall short in that regard, a large disgruntled youth population will pose unique and troubling challenges on the continent.

We want to help find ways to help ensure that youth are healthy and have the education and training that leads to enhanced employment opportunities.

The Department of State has many programs to promote mentorship, networking, and career development for young people.   Our embassy in Lilongwe has emphasized engagement with Malawi’s youth and the alumni of all of our exchange programs.

This includes, of course, the Young African Leaders Initiative (YALI)/Mandela Washington Fellowship.  I have heard about the incredible accomplishments of your exchange program graduates from my colleagues at the embassy.

Let me mention three very impressive examples, 2014 Mandela Washington Fellow Rachel Sibande has spearheaded the STEM fields in Malawi, founding the first ever technology hub called M-hub which has since trained many young people in high tech skills such as coding.  Another trailblazing alumna of our International Visitor Leadership Program (IVLP) is Chief Kachindamoto of Dedza who is well known for reducing child marriages in her area and sending the young people back to school.  An IVLP alumna from the public sector, the Ombudsman Martha Chizuma, keeps fighting to hold government officials.

I’m thrilled to hear that the U.S. Government will be extending assistance to strengthen higher education opportunities in Malawi.  I understand that LUANAR itself has benefitted from financial and technical support through our embassy to develop post-graduate training programs in dietetics and food and nutrition science.

This work is critical to advance Malawi’s journey to self-reliance and to ensure tomorrow’s leaders have the benefit of global best practices.

I also want to make a plug for our new University Partnerships Initiative, which aims to strengthen ties and encourage new collaboration between U.S. and African universities.  Focus areas include faculty and student exchanges, joint research, building administrative capacity, and creating public-private partnerships.  Our goal is to strengthen Africa’s educational institutions as instruments of national development.  We want to see students armed with the skills needed to join the workforce and to generate economic opportunities themselves.

But a healthy, educated, and innovative population is only possible with our third priority: advancing peace and security.  The United States will continue to help our African allies build the capacity to address security challenges on the continent bolstered by capable and accountable security and defense institutions.

With close to 1,000 peacekeepers serving in United Nations missions in the Democratic Republic of the Congo and elsewhere, the Malawi Defense Force is an outstanding example as an “exporter of security.”    More than half of the police officers Malawi has deployed to international missions are women, setting a powerful example of women’s critical role in working towards enduring peace and stability.  We strongly support and value Malawi’s contributions to peace and security in Africa.

Finally, our fourth priority – our unwavering support of Africa and Africans – brings us full circle.

We have walked side-by side with Africans for decades.  How so?

Through our programs like Power Africa, the Peace Corps, the President’s Malaria Initiative, and our signature HIV/AIDS program, the U.S. President’s Emergency Plan for AIDS Relief, or PEPFAR.

These programs have provided electricity to towns and villages.

They have brought enthusiastic American volunteers to rural areas across Africa to focus on community-led health and education projects.  They have also saved lives that would have been lost to malaria and HIV/AIDS.

Since 2004, PEPFAR has invested more than 1 billion U.S. dollars in HIV programs here, in partnership with hundreds of organizations and the Government of Malawi.

We are delighted that Malawi will be one of the first countries to reach epidemic control in Southern Africa.  With more than 813,000 of the country’s estimated 1.1 million people living with HIV now on lifelong antiretroviral treatment.

Through exciting initiatives like DREAMS – Determined, Resilient, Empowered, AIDS-free, Mentored, and Safe -and the Secondary Education Expansion activity, we’re also working with Malawian colleagues to address the incredible vulnerability of young people to HIV and early pregnancy.  That vulnerability hinders the prospects of Malawi’s young people.

There is no better way to demonstrate the U.S. commitment to Africa than through our investment in its most important resource – its people.  I have devoted most of my career as a diplomat to working in Africa because I am so proud of how we engage on the continent and what we have achieved together.

As the Chichewa proverb says, “A single head cannot carry the roof alone.”

That is true within a country, and it is true between countries.  As I said at the top of my remarks, I am in Malawi to listen, learn, and to find new areas of cooperation.  I also come to reaffirm the United States’ unwavering commitment to Africa, and to Malawi.  The future of Africa and the future of the U.S.-Africa partnership is very bright.