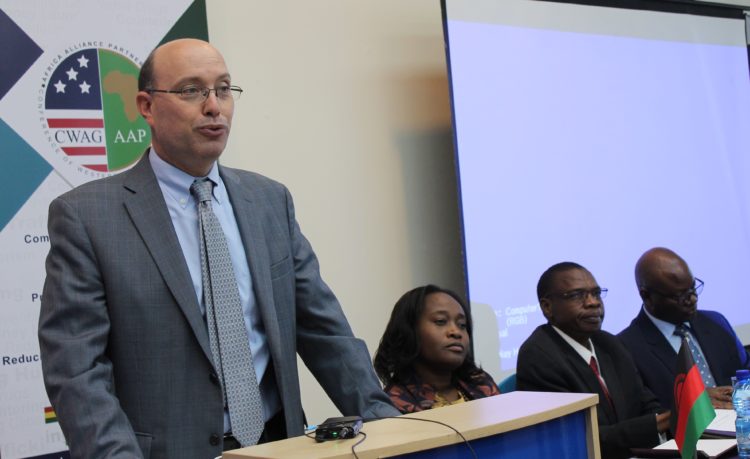 It is my pleasure to join you today for the opening of this training for law enforcement and judiciary personnel on best practices in the fight against wildlife trafficking. This is particularly meaningful to me as a former lawyer involved in environmental issues.

I am glad to be here today to express the United States Government’s support for Malawi’s sustained efforts to protect its wildlife resources and to combat illegal wildlife poaching and trafficking.

While I want to start by acknowledging the Government of Malawi’s strong leadership on this issue, it saddens me to say that Malawi remains a source country of illegal wildlife products.  In Kasungu National Park, for example, the elephant population has fallen from more than 2,000 to fewer than 100 in just two decades.

Thanks to President Mutharika’s personal leadership on the issue, things are heading in the right direction.  In late 2016, Malawi’s Parliament passed and the President then quickly signed the updated National Parks and Wildlife Act.  A few months later, an updated and expanded list of protected species was published.  I also understand an amended Forestry Act is in the works and will hopefully soon cap a well-rounded legal framework for wildlife protection.  Considering the slow pace of legal reform can sometimes take, this is an achievement that deserves to be commended.

Great laws can only do so much and, as always, implementation is key.  In that regard, Malawi also deserves praise for a marked increase in both the number of prosecutions and convictions of wildlife criminals.  Equally important is the nature of the sentences themselves.  Today criminals can no longer get away with a modest fine.  If you are caught, you are going to jail.

In May 2017, thirty-five people including foreign nationals were sentenced to up to 18 months in prison for illegal logging within Lengwe National Park – Malawi’s largest ever recorded illegal logging case.  More recently, a poacher and his two accomplices were convicted and sentenced to 18, 10, and 8 years imprisonment respectively for killing a black rhino in Liwonde National Park.

I’d also like to commend Malawi for taking a holistic approach to this problem.  In 2016, the Government of Malawi created an interagency Wildlife Crime Investigation Unit.  I am delighted to see so many of the agencies and departments involved in this unit represented here today including the Police, Customs, Immigration, Wildlife, Forestry, Anti-Corruption Bureau, as well as the Judiciary.

But, work remains to be done.  Recent sizable seizures of ivory and rhino horn in Malawi and abroad suggest that Malawi has unfortunately become a regional hub for trafficking in wildlife products.  According to the Center for Advanced Defense Studies (C4ADS) Air Seizure Database for Africa, Malawi has the third highest number of wildlife seizures in Africa.  Most of the product seized is coming from outside Malawi.

Malawi can no longer afford to go after solitary poachers or loggers and small-time traffickers.  We encourage you to take the next step to tackle sophisticated transnational criminal network spanning continents.  The next two days of training will be part of that step.

As a committed partner of Malawi, the United States Government has dedicated substantial resources to help the country fight wildlife trafficking.

The U.S. Department of State has helped train and equip wildlife rangers in Liwonde.  It also supports wildlife crime investigation and prosecution, and is helping Malawi develop a canine unit dedicated to detecting smuggled wildlife products.

The U.S. Fish and Wildlife Service has provided wildlife crime scene investigation training to both Malawi Police Service and Department of National Parks and Wildlife officers.

I am also happy to report that the U.S. Department of State has just released a new Notice of Funding Opportunity focused specifically on interdicting wildlife trafficking in Malawi.  This latest announcement brings the United States Government’s total investment in protecting Malawi’s wildlife to over $3 million in the last two years alone.

It is because of our joint dedication to combating wildlife crime that we are particularly happy and grateful to see the Conference of Western Attorneys General generously providing their support.

To conclude, I’d like to thank all of you here today:  the men and women on the frontlines combatting wildlife trafficking each and every day.  I know it can be a lonely and sometimes dangerous fight and I know your frustrations are many.  But please know that you are supported and that your important work has a positive impact in the country and beyond Malawi’s borders.  You are the defenders not only of Malawi’s, but also of Africa’s, invaluable wildlife heritage and you should hold your heads high as you fight on.