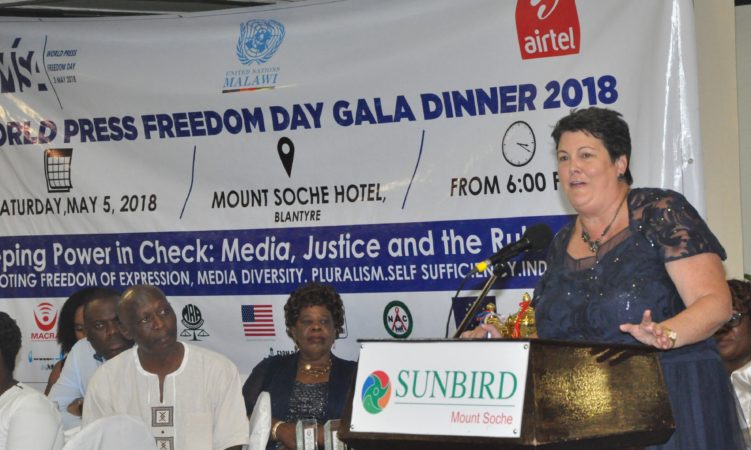 I am delighted to join all of you to celebrate media freedom and the wonderful achievements of Malawian journalists over the past year. And the theme you celebrate tonight “Keeping Power in Check: Media, Justice, and the Rule of Law” has never been more important – in Malawi, in the United States, and across the world.

The U.S. Embassy values our partnership with MISA Malawi. During my three years in Malawi, we have collaborated several times to support professional development opportunities for Malawian journalists. For example, this year we provided training for 20 reporters from community radio stations across the country. And I am pleased to mention that right now, in collaboration with MISA, the Malawi Electoral Commission (MEC), and the Voice of America (VOA), we will offer training this August on electoral reporting.

Over the last year, we’ve sent four Malawian journalists to the United States to hone their investigative reporting skills while engaging leading American journalists and academics.
And, again this year, the U.S. Embassy is proud to sponsor three categories in tonight’s awards – Blogger of the Year, Columnist of the Year, and Radio/TV Show Host of the Year.
We do all this because freedom of expression and a free media are the strongest pillars of democracy in Malawi. The U.S Government stands with those who want to see Malawi continue as a vibrant democracy where citizens freely express their views on pertinent public issues and where the “fourth estate” is trusted to keep governing institutions and leaders accountable.

Being on the receiving end of the questions of a journalist committed to that accountability can be uncomfortable for people in public office, even Ambassadors! But it’s absolutely essential to ensuring that taxpayers, shareholders, and people not powerful enough to conduct investigations or ask questions on their own receive the services and the leadership they deserve.

A former U.S. Secretary of State once observed that, “When a free media is in jeopardy, all other human rights are also threatened. We must continue to champion those who stand for media freedom – and expose those who would deny it.”

As the 2019 elections approach, the importance of a responsible press cannot be over emphasized. Malawian citizens will look to you all – the journalists in this room – for reliable information about the electoral process – information that is credible, factual, and timely. I hope that Malawian politicians will respond to your call for them to eschew violence and that you will keep the pressure up for political leaders to sack or expel those who perpetrate it.
Your fair and unbiased coverage of all political parties and candidates will help Malawians to make informed decisions about the people they choose to lead this country. This is incredible power, power which will be squandered if you trade your integrity for a brown envelope to please an influential player or bury a story.

Now, let me give some praise where praise is due. Malawi continues to be a leader in the region in terms of press freedom, and I salute all those in Malawi’s media houses, civil society, and government who are committed to making sure Malawi remains a leader. Just last week “Reporters Without Borders” released its World Press Freedom Index for 2018 and Malawi once again scored significantly higher than all of its immediate neighbors.
Malawi’s positive score in this year’s index stems in part from the enactment of the Access to Information Law – a commendable accomplishment after 12 years of hard work by MISA-Malawi and numerous others. But, if Malawi is to remain a regional leader in press freedom, the Access to Information Law must be fully implemented without further delay. Malawi’s citizens, and the world, are watching and waiting…

If Malawi is to remain a leader in the region, the brave work of Malawi’s independent media must continue – and expand. Just over the last few years we’ve seen significant examples of how brave investigative reporting has exposed wrong-doing leading to important changes:

This kind of investigative reporting matters. And it leads to action. It empowers Malawi’s accountability institutions; it inspires Malawi’s citizens to demand greater transparency and accountability. It will lead to corrective action and, eventually, to a sense that crime and corruption don’t pay because it will be held accountable. Without the greater accountability your reporting can inspire, Malawi will be stuck, stuck with poverty, stuck with food insecurity, and stuck with a growing population with less and less access to education and health services, while a tiny minority of the political and economic elite prosper. I’m sorry to be blunt, but sometimes “Mulendo abwera ndi ka lumo kokuthwa.”

I hope you leave this celebration of your vital work recommitted to your noble profession and the difference it can make. Dig deeper and ask tough questions. We need your professional expertise, your courage, and your integrity. Now more than ever.

As we celebrate your achievements tonight I offer my hearty congratulations to those going home with awards – you inspire us all. And I offer my sincere thanks for the noble work you do to keep us accountable and to keep Malawi moving forward to greater and greater things.