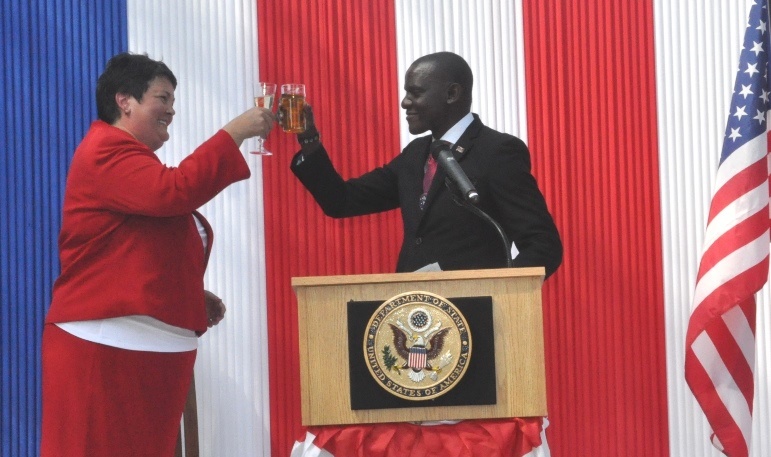 And please at the top, let me “protocol” the U.S.-affiliated companies who made generous contributions to today’s festivities.  A really sincere thank you to:

Thank you for your support and for embodying American business practices in your Malawian enterprises.

Last year out of respect for the hardship so many Malawians were enduring, we had a much smaller party.  Happily, this year the harvest has been good: there is much to be thankful for and much progress to celebrate….but I’ll talk about that in a minute.  So, we could have a bigger party and there are more Americans here than we’ve had in past years: they are a small but remarkable sample of the great things American companies, churches, schools – and even the American government! – are doing in Malawi.  I hope you’ll get a chance to talk with them about the wonderful things they’re doing here.

We’ve tried to make this as much like a July 4 celebration in the U.S. as we could.  I’m telling you, in America on the Fourth we’d be a lot less well dressed!  But we have some games (and prizes) over there like you’ll find in America, and some hot dogs we brought in special and, as in America, there’s some speech making ….

Americans here will tell you that we get very homesick on the Fourth.  So it’s nice to gather together and, as we do in the U.S., reflect on big events of the past year.  Here in Malawi, as I reflect on the past year

–I remember with pride that Malawi and AFRICOM hosted the African Land Forces Summit, which brought together military leaders from virtually every country on the continent to Lilongwe.

–I cheer Malawi’s leadership in being one of the first countries in the world to implement Test and Treat, so people testing HIV positive can receive treatment that will save their lives and protect their loved ones the same day they get their test results.

–I celebrate that Malawi will be the first country in Africa to have an Adolescent Girls and Young Women Strategy, a strategy that the United States will support with $90 million in new investments to build new high schools to ensure that girls (and boys!) stay in school and stay HIV-free.

As we reflect on the past year, I’m proud that America made good on her partnership with Malawi and provided 40% of the response to last year’s food crisis.  I commend the Government of Malawi for working to make sure there’s not a food crisis every year by passing key land laws and launching new Agriculture and Irrigation policies.  To ensure these changes have maximum impact, I hope they will make meaningful – and long overdue – changes to the Control of Goods Act so that Malawi’s private sector will invest in production of food crops and benefit from the high prices we’re seeing in surrounding countries.

Americans on this Fourth reflect on a year marked by an extremely divisive Presidential campaign and election.  For some Americans, this election symbolizes a brave new ordering of American obligations and plain speaking, which outrages others.  All of us – from whichever party we belong – are thanking God for democracy…or for democratic checks and balances! All Americans, no matter what their politics, believe fervently in that democracy, and believe it makes us more prosperous and stronger (even though it sometimes appears that it is dividing us).

What does the change of government in Washington mean for Malawi, herself a beacon of freedom for the rest of Africa?  The United States believes in Malawi’s success, and we are investing to help make it a reality.  But I think all of us are going to have to try harder to make the case for why that matters to America.  A democracy this great should produce a great economy, with opportunities for Malawians and Americans too, but Malawi’s vibrant democracy hasn’t yet achieved the prosperity it deserves – because, I think, Malawians in their own minds haven’t completely answered some very tough questions.  Questions like:

As I thought about it today, I remember saying on the Fourth in 2015 that I hoped to be able to say “I lived in Malawi when inflation was reined in and agricultural production and exports soared.”  I’m still hopeful that that’s what I’ll leave Malawi saying.  For this to be a transformational period in Malawi’s history, it’s critical now that agricultural and Public Sector reforms are fully implemented; that budgetary discipline and financial oversight at both the national and district level continue and deepen; that the Anti-Corruption Bureau’s new momentum continues and quickens and a new era of accountability begins.  If it doesn’t, if we answer “yes” to the first questions in that series rather than the second, Malawi will keep reeling from crises and we’ll be talking about emergency responses when we should be working on development and celebrating record breaking exports.

I am committed with my mission here to help you achieve the critical reforms you’ve begun; to spur growth in agriculture and manufacturing and power.  And I believe we’ll all be able to say, “I lived in Malawi when it turned a critical corner.”

So please join me in raising a glass to His Excellency the President of the Republic of Malawi Professor Arthur Peter Mutharika, to the U.S.-Malawi partnership, and to the prosperous future of all Malawians.