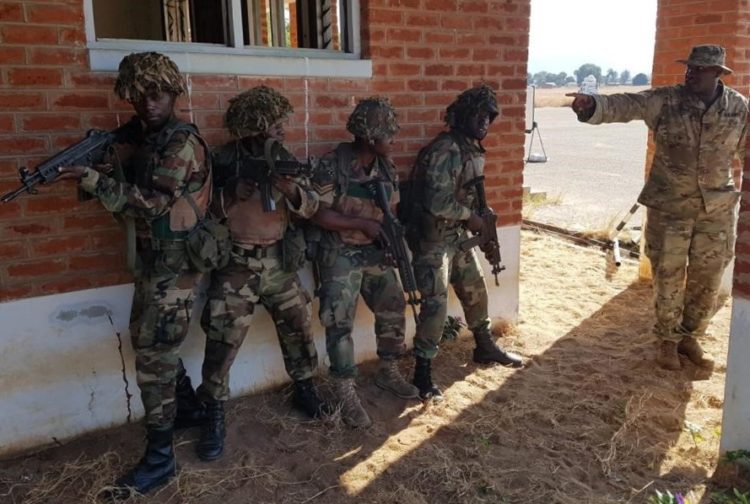 The Chargé d’Affaires of the Embassy of the United States to Malawi, Mr. Andrew Herrup attended the Malawi Battalion 11 VIP Day and graduation ceremony in Machinga, Malawi, to observe the conclusion of two months of pre-deployment training for approximately 850 Malawian soldiers who will deploy to the United Nations Organization Stabilization Mission in the Democratic Republic of the Congo (MONUSCO) in late August.  During the training, U.S. Army trainers and advisors, Malawian Defense Force instructors, and the British Peace Support Team – Africa provided instruction on casualty treatment and evacuation, convoy operations, logistics and base defense.

Each year, the U.S. Embassy in Lilongwe coordinates support to Malawi’s international peacekeeping contributions through the Global Peace Operations Initiative and U.S. military exchange programs. The GPOI is a U.S. government program established in 2005 to promote international peace and security by enhancing partner country capabilities to effectively train, deploy and sustain soldiers for U.N. peacekeeping operations.  For more than a decade, the U.S. government has provided Malawian peacekeepers with military equipment, pre-deployment training and advisory assistance through GPOI funds.

In his remarks to the graduating soldiers, Chargé Herrup recognized Malawi’s peacekeeping contributions over the past several decades and affirmed his confidence in MALBATT 11’s capabilities.

“I have no doubt that your disciplined actions over the next year will uphold MALBATT’s reputation as one of the U.N.’s most reliable peacekeeping units as you courageously protect the defenseless abroad,” he said.

The United States donated $1.3 million in military equipment, including body armor, helmets and tents, in May to support MALBATT 11, and is committed to supporting Malawi’s international peacekeeping efforts in future years.  U.S. Embassy Lilongwe will support next year’s MALBATT training with military advisors and will continue military chaplain exchanges that address combat stress and family reintegration for deploying soldiers.

The U.S. government provides a wide range of military assistance to Malawi through various programs that support peacekeeping operations, military education and training, humanitarian assistance, and HIV/AIDS prevention.  The United States has supported each of the MALBATT peacekeeping rotations with equipment donations and training support, totaling more than $10 million in assistance over the past 14 years.  The United States also dedicates more than $2 million annually to HIV/AIDS prevention programs within the MDF, sponsors dozens of Malawian soldiers to attend training courses in the United States and abroad each year, and regularly brings U.S. soldiers to Malawi for military exchanges.