Remarks by Ambassador David Young- June 15, 2022 *As prepared for delivery* 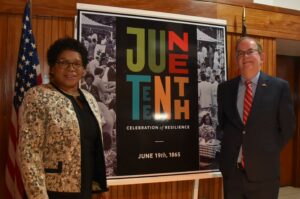 Friends and colleagues in business, civil society, and religious organizations,

And members of the Malawi Flames and their coaches.

I would like to give special acknowledgement this evening to my wonderful colleague Jeremey Neitzke, who leaves Malawi tomorrow after three outstanding years of service, both as Deputy Chief of Mission and Chargé d’Affaires.  Thank you Jeremey for your leadership.  We will miss you and Tania as you go to Mozambique!

Also, I must give a big shout out to the outstanding work of our amazing Protocol Specialist, Eleanor Nkozi, who was the chief organizer of our celebration tonight.  Assisted by Adonita Ahmetaj, Monica Bautista and Frank Mabry, the team orchestrated everything from the historic displays of Black history to the music to the hospitality.  Zikomo kwambiri Eleanor chifukwa cha kuzipereka kwanu pa ntchito ya ku Embassy.

And thanks to all of you for the warm welcome to Malawi.

It is indeed wonderful to be here in the Warm Heart of Africa!  Zikomo kwambiri!

This evening, we gather here to celebrate publicly for the first time in Malawi the new American holiday of Juneteenth, which commemorates the end of the enslavement of Black Americans in the United States in 1865.  As my colleague Dr. Fenton Sands described for us earlier, enslaved people in the state of Texas were not free more than two years after the Emancipation Proclamation until the Juneteenth order was issued by a Union general.

As we reflect on the meaning of this holiday, we recognize that the end of institutional slavery was the end of a monstrous evil in America’s history.

Frederick Douglass, one of my country’s greatest heroes and a founder of the civil rights movement, knew this reality firsthand.  An escaped slave who became an abolitionist of slavery and a suffragist for women’s rights, Douglass repeatedly called America to account for failing to live up to its ideals.  Douglass pointed out that slavery robbed America of its heart and its soul.  As we commemorate Juneteenth today, we must vow to fight such evil wherever it may be.

As you pass through our residence this evening, please take a few moments to read the stories of heroic Americans who campaigned for human dignity for Black and Brown Americans.  You can learn of Harriet Tubman and Sojourner Truth, W.E.B. DuBois and Martin Luther King.

Indeed, the ongoing struggle for racial justice shows that strides toward freedom are never easy, nor are they linear.  We take a step forward, then fall back, lurching onwards and upwards toward freedom, but always conscious that our hard-won gains can be lost in an instant.  For example, in the decades after the Civil War in America, racist terrorist organizations such as the Ku Klux Klan were established, and laws that guaranteed Black Americans their civil rights were replaced by the ludicrous lie that citizens could be kept separate but equal.

Similarly, we see that progress we have made recently has been matched by an ugly backlash of violence and racism.  America has seen the historic election of our first Black President and increased awareness and mobilization against discrimination and racism through the Black Lives Matter movement.  But we have also seen a resurgence of hate.

John Lewis, the great civil rights leader and Member of Congress who died last year, shared the resolve that is necessary to combat evil: “There are forces that want to take us back to another place.  But we don’t want to go back.  We want to go forward.”

That needs to be the rallying cry of all of us.  The acknowledgement of an ugly past must be paired with faith and hope, so that we can unite to fight injustice and create a better future through resilience and struggle.  President Biden signed Juneteenth into law as a national holiday in recognition of the fact that we must confront our ugly challenges head on if we are ever to go forward.

Now some of you may ask, what in the world does Juneteenth have to do with me here in Malawi?    Chifukwa chiyani tikulankhula za tchuthi cha Juni teenth?

I think there are several things.  Like America and every other country around the world, Malawi faces the continuing struggle to bring freedom and justice and human dignity to all its citizens.  All of us should be equal in rights and dignity, able to live lives of health and happiness, prosperity and fulfillment.

But if we are honest with ourselves, we must acknowledge that Malawi is not where it should be.   Invisible chains are pulling down millions of people in this country.

Two weeks ago, I met a young mother and 17-month-old daughter – let’s call them Rebecca and Mary – at a feeding center outside Blantyre.  Mary is severely malnourished, and her brain has not fully developed because of stunting and lack of nutrition.  Rebecca told me that her daughter is not responsive some days because she does not have enough energy.  So, Rebecca hikes six kilometers once a week with Mary on her back to a feeding center on the main road, run by a partnership of the Malawian government, UNICEF, and international partners.  Rebecca picks up a week’s worth of RUTF, the ready to use therapeutic food that is an essential life-saving meal that helps low weight babies like Mary have a chance at life and recovery.

Now we don’t know the end of this story.  Will Mary survive until 5 years old?  Will her brothers and sister?  Will she be able to make to make it through primary school and learn the basics of reading?  We don’t know for sure.  The sad reality is that today, this story of Rebecca and Mary has played out many, many times.

Does that make you outraged?  It should.   Extreme poverty is not inevitable.  When we look around the world, we see that hundreds of millions of people have risen out of poverty in recent decades.  Just like the battle against slavery, the brutalizing effects of extreme poverty can be defeated.   But ridding society of inequities and injustices requires sustained commitment and strong moral fortitude.

Gandhi once said that “poverty is the worst form of violence.”  Because the poverty that confronts Rebecca and Mary is dehumanizing.

Extreme poverty and stunting form a national crisis in Malawi.  There must be urgency to fight against it now, because with rapid population growth and a feeble economy, it will get worse in the years ahead unless there are dramatic changes.   In order to make poverty history, we have to change policies and structures that keep people poor.

There are three things that I believe are essential if Malawi is to move forward in its battle to fight poverty and change lives for good.  Because no amount of foreign assistance will lift people out of poverty if the structure of the economy is broken.   And to even begin talking about 2063 we must make changes in 2023.  The road to progress must begin now, and each step forward must be fought for and made with determination and courage.

His Excellency President Chakwera frequently cites these three priorities.  To support this vision, what is needed is a vigorous campaign by a united Malawi to work for these changes.

The first big task is:  Grow the economy through increased investment and private sector engagement.  Because the sad reality is that the economy has been shrinking in human terms for years.  The economy is now growing at perhaps 2 percent per year, but the population is growing by nearly 4 percent per year.  If the pie keeps shrinking, Malawi won’t be able to help its farmers and its urban and rural citizens to live better lives.

The policy framework needs to be reset to make this possible.  There must be a proactive approach to creating an environment for business and foreign investment.  Laws should be supportive of investment – by both Malawians of all backgrounds and those from other countries as well.  This can help diversify the economy into new agricultural crops, as well as services, financial activities, mining and other sectors.  The constraints holding back investment in Malawi must be addressed.  As President Chakwera has said, the private sector is an ally, not an adversary.
The second big task, which is related, is to lift up the poor through increased and broad-based opportunity for all Malawians.  This means creating opportunities for self-improvement, and not just handouts.  Experience around the world has shown that indefinite subsidies only perpetuate — not eliminate — poverty.

The reality is that the international community provides hundreds of millions of dollars every year – through health, education, emergency food assistance and other programs.  The United States provides more than $250 million each year to save lives and change lives for good.  We are committed to continuing this assistance.  We can point to real achievements in our assistance over the years.  For example, since the year 2000, life spans have increased in Malawi from 45 years to 65 years by 2020.  This is an extraordinary achievement of our cooperation together.  HIV/AIDS is now on the path to epidemic control, and great strides have been made against other diseases as well.

But the sad reality is that all of the international assistance that has come to Malawi has not ended the cycle of poverty.  We need to pair such interventions with creation of a culture of opportunity to raise incomes and spread prosperity.

A third big task, as we all know, is combatting corruption head on.  With courage and conviction.  Corruption creates a web of relationships that perpetuates poverty and illegality.  Battling corruption is a long-term battle, but it must begin today in earnest.  The corrupt must be dismissed from positions of power.  Through the development of a culture of transparency and openness, and with a strong dedication to access to information for the public, the rot of corruption will fade.

This is Malawi’s battle, and it must be led by Malawians.  As partners, we support the President’s efforts to combat corruption.  It is a central part of making the economy work for all Malawians.

Why is all of this important?   Because 17-month-old Mary – like millions of other impoverished girls and boys throughout the country — needs to have a chance for a brighter future.  She needs the nation’s economy to work for her – and not just the few.

As I close tonight, let me mention W.E.B. Du Bois, one of our American heroes profiled in our living room.  Du Bois spoke of what we called the “Talented Tenth,” the idea that those who have had great opportunities of education and position need to give back to others in their community to help lift up with a helping hand.  Well, I would suggest tonight that if you are at this reception tonight, you are a person who has had tremendous opportunities and benefits.  All of us here tonight stand on the shoulders of those who have lifted us up, who have encouraged and educated and guided us.

To my Malawian friends and those friends who enjoy the hospitality of this beautiful land, I would say that we all need to focus on what it means to be part of the Talented Tenth.

As we reflect on what Juneteenth means for us, let us dedicate ourselves to doing all that we can to build a better future for the girls and boys of Malawi.  If we grow the economy, lift up the poor with increased opportunity, and dismiss the corrupt, we can expand justice and prosperity in this land.  So our children can enjoy lives of fulfillment and dignity.

Thanks very much.  Zikomo kwambiri.