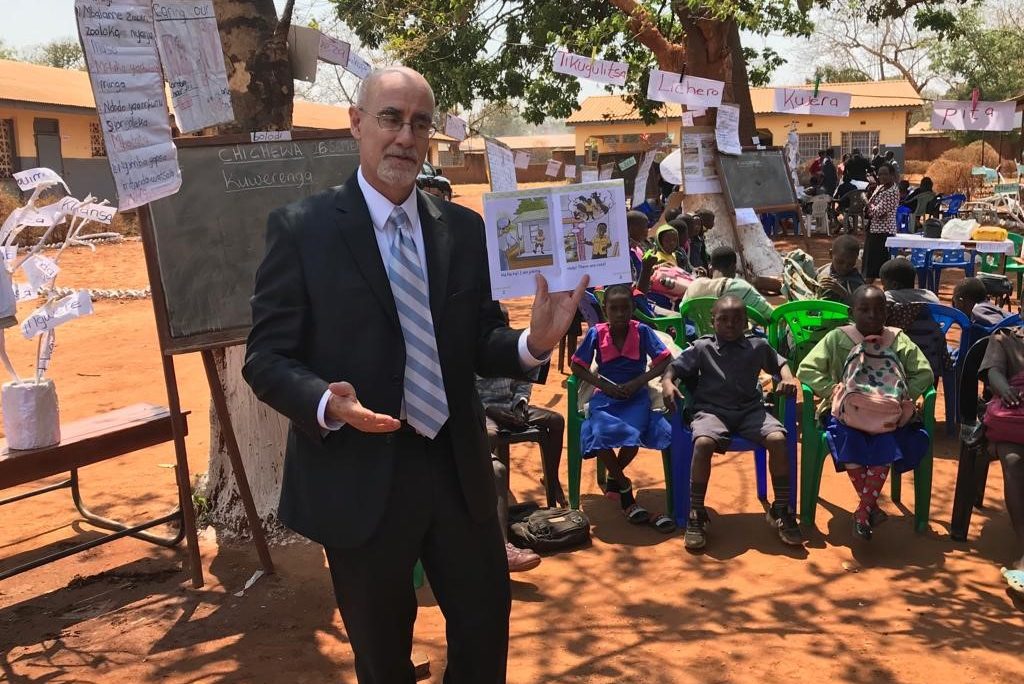 “LET’S JOIN HANDS TO READ AND CARE FOR BOOKS”

Today, the U.S. Ambassador to Malawi, Robert Scott and the Secretary of Education, Science and Technology (SEST), Mr. Justin Saidi celebrated the International Literacy Day with an event to support the new campaign: “LET’S JOIN HANDS TO READ AND CARE FOR BOOKS”/ “TIGWIRANE MANJA POWERENGA NDI KUSAMALIRA MABUKU.” Secretary Saidi and U.S. Ambassador to Malawi were joined by representatives from the United States Agency for International Development (USAID), the U.K.’s Department for International Development (DfID), the Director of Basic Education, Director of Directorate of Inspectorate and Advisory Services, the Mayor of the City of Lilongwe, Lilongwe Urban’s District Education Manager, teachers and students from Lilongwe Local Education Authority Primary School, and community members. All the participants committed to join hands to support reading and caring for books in celebration of International Literacy Day.  The event was broadcast nationwide on the radio as well as television with sign language interpretation for the hearing impaired throughout the entire event.

Learning to read at an early age provides the foundation for all future learning and expands ways in which children can learn about and from the world around them. Yet, in Malawi, the 2017 National Reading Assessment found that 75 percent of children at the end of Standard 2 could not read a single familiar word such as “father” and “mother” in Chichewa.  Taking this challenge head on, the Ministry of Education, Science and Technology established the National Reading Program (NRP), and the Government of the United States of America, through its Agency for International Development (USAID), joined in to support this program.

With U.S. government assistance totaling $150 million, the MOEST, through the NRP, has trained over 56,000 teachers, developed classroom assessments and remediation activities, adapted supplementary reading materials into braille, revised student books for all learners in Standards 1-4, distributed nearly 12 million textbooks, and printed and distributed almost 12 million supplementary readers to all primary schools nationwide. In support of the NRP, Ambassador Scott told the gathered participants: “All children deserve the opportunity to learn to read and engage with books. All children, including those with disabilities must have access to reading material so that they can learn and grow.”

During the event, Ambassador Scott and Secretary Saidi celebrated the symbolic handover of an additional 2.2 million textbooks for replenishment purposes and another 2.2 million copies of supplementary readers, which are being distributed nationwide to public primary schools. “All primary schools should orient all learners and guardians on how to take care of the books entrusted to them. Parents and guardians should also take a central role in helping learners practice reading but also take care of books.”

The event reinforced the importance of children reading every single day and caring for their schoolbooks. Participants were told that literacy is not only the responsibility of the Ministry and schools; literacy begins in homes and in communities. Parents and community members were encouraged to help children read and to help them care for their books so that future students can have the same opportunity to explore good books and learn.