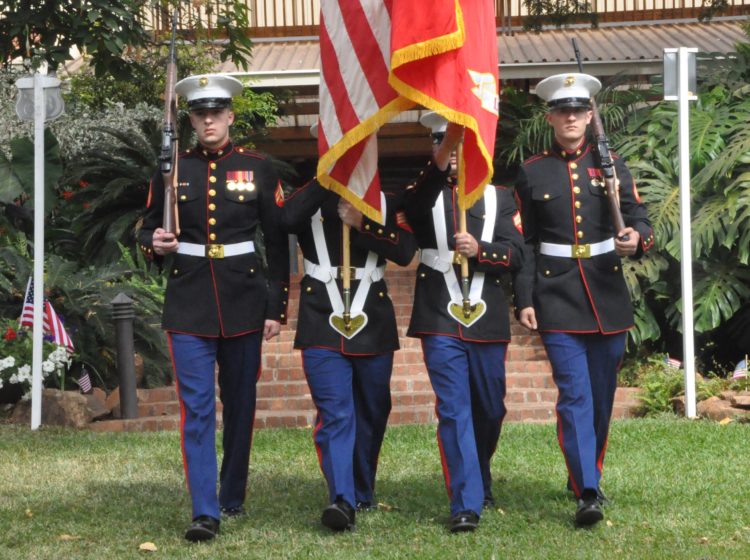 Thank you for joining us all today as we celebrate America’s 242nd birthday!  I am honored that so many of you have taken time out of your busy schedules to help us mark this occasion.

The theme for today’s celebration is a drive along Route 66, the iconic American highway between Chicago and Los Angeles, along which millions of American migrated west in the early part of the last century.  Memorialized in song, on TV and in literature, including John Steinbeck’s Pulitzer Prize winning The Grapes of Wrath, Route 66 reflected the American belief in a road to a better life.  Decommissioned many years ago, Americans remember Route 66 as a thread that stitched together communities along its path, helping a growing nation mature into a unified whole.

As I begin, I want to make sure to thank the sponsors of today’s event for their generosity.  While you’re enjoying the foods we eat along the route of the iconic Route 66, I hope you’ll join me in thanking

for their financial and in-kind contributions.  I also want to thank Eleanor Nkosi and Elizabeth Al Sulaimani and a big team from the Embassy Management Section who’ve been working for weeks to bring things together.

Because on the Fourth of July Americans celebrate their heroes, I’d like to say a few words to my fellow Americans here today and around Malawi.  It has been an honor for me to serve as your ambassador for the last three and half years.  From the early part of the last century and continuing today, from Chitipa to Nsanje, I am so proud of the work American citizens have done, side-by-side with their Malawian friends, to build a brighter future for Malawi. Your work in schools, hospitals, churches, companies, and NGOs across the country truly embodies the best of America.  Sadly, just this past weekend we learned of the passing of one such exemplary American citizen, Mr. Dick Day, who spent the last 25 years of his life dedicated to empowering Malawians in and around Zomba to build a brighter future for themselves.  I salute Dick Day and all other American citizens like Dick for their outstanding passion and commitment to Malawi’s development.

I’d also like to call out some great Americans at the Embassy.  As E.J. and Holly Monster, Nick Novak, and Kenn Dupree leave Malawi, I hope you’ll have a chance to thank them for their work to ensure Embassy operations were run with integrity, to protect American citizens, to expand our outreach to Malawi’s dynamic youth, and to broaden U.S.-Malawi trade and investment ties.

That’s exactly the kind of thing on which Americans reflect on the Fourth of July.  Indeed, Thomas Jefferson wrote on July 4, 1776, “Let the annual return of this day forever refresh our recollections of these rights, and an undiminished devotion to them.”

This July 4 is particularly poignant for me as it will be my last in Malawi. If you will allow me, I’ll share a few thoughts on the work the United States has done in four key areas since my first Fourth here in 2015, what we’ve helped Malawi accomplish and what still needs work:

The work that Malawi will do under its soon (but not soon enough!)-to-be-launched Adolescent Girls and Young Women Strategy, only the second multi-sectoral AGYW Strategy in the world, will be critical to this ultimate goal – and, frankly, to all of Malawi’s other development goals.  I hope to sign an MOU with you, Minister Msaka, and three other of your Cabinet colleagues next week committing the United States to major investments in new secondary school construction and the Government of Malawi to the waiver of secondary school tuition and curriculum improvements to keep students HIV-free.

I’m very proud that the Millennium Challenge Corporation’s Compact with Malawi has increased the number of customers connected to the electricity grid and improved the capacity of Malawi’s transmission lines.  We’re going to be cutting a lot of ribbons on new sub-stations before the Compact ends on September 20.  But Compact investments were meant to spur investment in new generation so I hope Malawi will quickly – and using proper procurement procedures – sign Power Purchase Agreements to get power on line and signal to the world that Malawi is open for business.  It’s also critical that Malawi implement a cost reflective electricity tariff and ensure ESCOM remain creditworthy and free from manipulation.   If, but only if, these things happen, Malawi will be eligible for a new Compact.

I have encountered so many hard-working and committed Americans and Malawians, particularly the dynamic change-makers participating in the U.S. Government’s Young African Leaders Initiative, over the last three and a half years.  You give me real hope for the future.  I do believe, now more than ever, that Malawi is a nation of promise.  As President Mutharika likes to say:  “Malawi is a great nation in a small country.”  The United States will stand with Malawi to help it fulfill its great promise.

I’m now a little Malawian, so I will say “With these few remarks, it is my singular honor to raise a glass to His Excellency Professor Arthur Peter Mutharika, to the people of the Republic of Malawi, and to the enduring friendship of the United States and Malawi.”