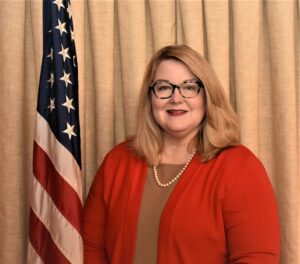 Amy Diaz is the Deputy Chief of Mission at U.S. Embassy Lilongwe.  Prior to this assignment, Amy was the Deputy Director of the Department of State’s Office of Policy and Global Issues for Europe, where she led a diverse team of professionals engaged in advancing the U.S. Government’s national security priorities across Europe – from defending human rights and democratic values to protecting American citizens and bolstering alliances postured to compete with global rivals.

From 2017 to 2020, Amy was the Consul General in Harare, Zimbabwe.  During this tumultuous period that included a military-led change of government and the COVID-19 pandemic, Amy led the U.S. Embassy’s consular section in assisting American citizens, including the evacuation of hundreds of Americans at the outbreak of COVID-19, and in facilitating travel for more than 12,000 Zimbabweans a year.  Prior to her assignment in Zimbabwe, Amy served in Kabul, Afghanistan, as the head of the U.S. Embassy’s Counternarcotics Team – the largest Department of State narcotics and law enforcement program in the world.  Her other postings include Rule of Law Advisor (2015-2016) and Coordinator for the Summit of the Americas (2014-2015) at the U.S. Embassy in Panama; Internal Political Unit Chief at the U.S. Embassy in Georgia (2011-2014); Vice Consul at the U.S. Embassy in Zimbabwe (2008-2010); and Vice Consul at the U.S. Consulate General in Monterrey, Mexico (2006-2008).

Amy joined the Department of State in 2002 as a Presidential Management Fellow and entered the Foreign Service in 2005.  She is a graduate of St. Johns College in Annapolis, Maryland, and received her Juris Doctorate from the University of Arizona.  Prior to attending law school, Amy served three years in the New York Governor’s Office as the Assistant Director of Special Projects and Protocol.  In this position, she organized large-scale community events, fundraisers, and represented the Governor at events across the State of New York.

Amy is the recipient of numerous Superior and Meritorious Honor Awards from the Department of State.  She is in Malawi with her husband, Roland Diaz, and their ten-year old son, Rhys.

Embassy of the Unites States
Suggested for You
News