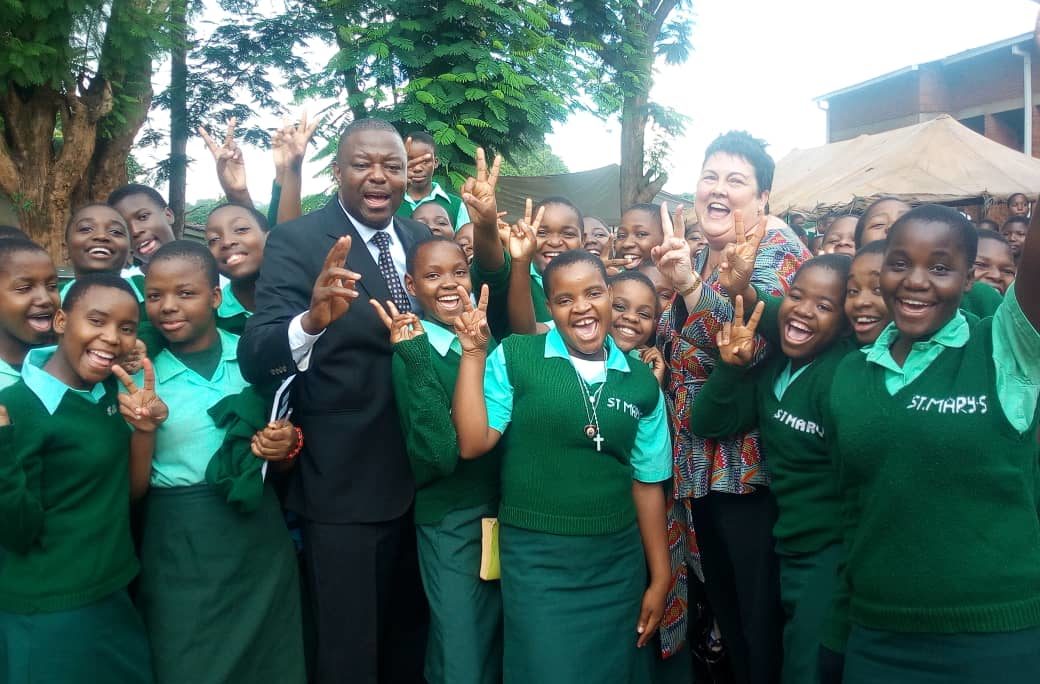 I’m SO happy to be here today with Zodiak to celebrate the achievements of these amazing girls!  Congratulations to the awardees on doing so well on your MSCE examinations!  We all applaud your hard work and determination.

I want to thank Zodiak Broadcasting for not only hosting today’s event to honor these bright young women, but also for your continued support of girls’ education and their future economic empowerment.  I know this is a years-long commitment.  Zodiak has provided so many scholarships for girls and women, even for study abroad in places like Harvard University. (Maybe the best university in the world.)  Zodiak founder and CEO Gospel Kazako walks the walk; there are women in positions of power throughout his operations.  There are many things I respect about you, Gospel, your entrepreneurship, your support for community radio, your ability to speak truth to power…..but maybe your commitment to the empowerment of women and girls most of all.

As but one concrete example of this commitment, Zodiak’s radio and social media campaign, “Lekeni”, is working to end child marriages before they happen and to emancipate underage girls from forced marriages.  I commend Zodiak and its partners for bringing more awareness to this issues.

As we stand on this beautiful St Mary’s Secondary School campus, I think it’s fitting to share the inspirational story of one of St. Mary’s former students.  As I prepared to come here, I learned the story of Memory Mdyetseni, who was committed not only to her own education but to the education of other girls as well.  But her path was not easy.

Sadly, both of Memory’s parents died by the time she started secondary school.  As the oldest daughter, she had to drop out of school to look after her five siblings.  But soon, her siblings moved to live with various family members, and an uncle adopted Memory.  Her uncle knew the importance of her education and enabled her to go back to secondary school.

Memory stayed in school and sat for her MSCE, finishing Form Four, before her uncle, too, passed away.  With no one else to turn to, she took a bus back to her family’s village.  There she was pressured to get married, but resisted.

Back in the village, she no longer focused on her education but instead was kept busy drawing water, cooking, fetching firewood, and cultivating land for tobacco.  But she volunteered to teach at a nearby school operated by Canadians.  However, the school ended up closing, leaving 24 girls without another option.  Knowing the value of an education, Memory worked with a colleague to put those girls through another school.

Memory’s resolve to continue her own education had not dwindled and soon after she was accepted into college in Malawi.  After graduating with her bachelor’s degree, Memory and her former colleague committed to opening their own school for girls, and in 2008, their dream became a reality.

Called Atsikana Pa Ulendo, or “Girls on the Move”, Memory’s school has graduated more than 400 young women, most coming from backgrounds of extreme poverty and hardship.

Memory’s story has a happy ending, but the challenges she faced remain all too common for so many Malawian girls.  By age 18, half of Malawian girls are married and one in four girls have already had a child.  Another terrible, terrible statistic is that 39% of young women aged 13-24, who reported ever having sex, experienced forced sexual initiation – that’s rape. Being the victim of this type of violence certainly doesn’t mark you for life, but it is undoubtedly something that young women who have experienced must overcome.  We can, we must change this reality.

The U.S. Government is committed to championing the empowerment of Malawi’s adolescent girls and young women.  We know that education is crucial for all children, but especially girls.  Empowering Malawi’s girls, keeping them free from violence, and educating them are the best ways to ensure that Malawian communities and society thrive.

A girl’s education and empowerment betters everyone around her.  When girls thrive, families thrive, communities thrive, Malawi thrives.   Adolescent girls are the fulcrum of all of Malawi’s development goals.

On the bright side, as many of you may know, Malawi is one of the only countries in the world to have a National Strategy for Adolescent Girls and Young Women.  This positions Malawi to lead in this critical issue area, to inspire other countries to follow.  Full implementation of the strategy is critical and I’m looking forward to seeing the ministries the Education, Labor and Youth, Gender, and Health work together in Lilongwe and at the district level to stop early pregnancies and Gender Based Violence and keep girls healthy and empowered.

Under the AGYW strategy, the United States is expanding our programs to support the education of girls (and boys too but girls need some extra help):

Through the PEPFAR DREAMS public-private partnership, we support a whole-of-girl approach to reduce the risk of HIV – including scholarships, GBV prevention and post violence care and HIV prevention services.

We’re working with traditional authorities to prevent gender-based violence.  Many of them including Paramount Chiefs Kawinga, Kyungu and Gomani V, have been outspoken in saying violence against girls and women is not part of their culture and must be stopped.

And we will invest up to 65 billion Kwacha to expand access to secondary school for tens of thousands of young women like you, keeping them in school longer and reducing their lifetime risk of acquiring HIV.  The Government of Malawi’s abolition of tuition secondary school fess, inclusion of comprehensive sex education as part of the curriculum, establishment of Gender Based Violence-free zones at schools, and provision of youth friendly health services near schools will magnify the impact of this investment and go along way to empowering all of Malawi’s young people, and especially her girls.

And I am proud to announce a new initiative this year, that includes greater engagement with faith-based and traditional leaders, especially in the prevention of sexual violence and HIV risk among 9-14 year olds.

To all of the students listening today – Keep reaching for your your educational dreams.  Study hard and soon you will be on this stage – receiving awards or giving keynote addresses!

Before I conclude, I want to take advantage of having the microphone at this very important stage of your life – as one chapter begins and another opens – to – with humility – offer you a few words of advice:

Once again, I want to congratulate the Best Girls on their outstanding academic performance and wish you all the best in your continuing studies.  You are an inspiration to all of us!