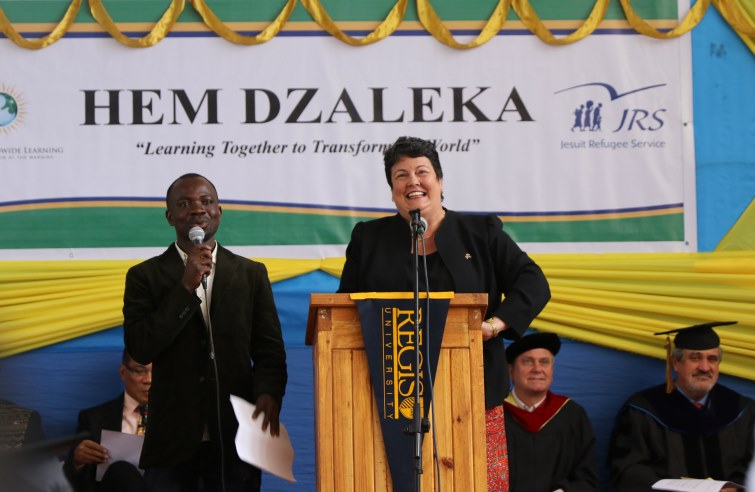 It is really is my honor to deliver the commencement address to HEM Dzaleka’s Liberal Studies Diploma recipients.  What you have accomplished is nothing short of a triumph and I am delighted to be here with your families and friends – and your diploma program classmates – to celebrate with you.

I’m very proud, too, that the Diploma you’re receiving through this Jesuit Refugee Service/Jesuit Worldwide Learning program comes from a fine American university, Regis University.  I also went to a Jesuit university, Georgetown University.  I think that might make us rivals, but I know Georgetown has donated their domain and online blackboard to the program so we’ll say partners, not rivals.

Today, your refugee experience and your diploma are both your foundation and a new beginning.   Your diploma is worthy of celebration no matter where you earned it, but is even more impressive because you’ve earned despite some real hardships…….I’m speaking here of your truly terrible internet connections.  …not to mention in a refugee camp!   We should stop for a minute and think what that means, you earned a university diploma in a refugee camp.

I acknowledge with respect and humility that you are much more than refugees, that refugee is not a label any of you chose.  You are students, professors, engineers, farmers, dancers, poets, mothers (one of you graduates, while earning credits was also creating a whole new human being!!), important members of your community and refugees.  You are survivors, each with a remarkable story that demonstrates resilience and inspires.

And today, despite countless obstacles, you are graduates! You are living proof that people will succeed if given a chance.  Let today’s graduation serve as a reminder—to yourselves and the rest of the world—that you are not defined by your experience or hardships, but rather your tenacity and unwavering courage.

As an American, I am keenly aware of the contributions of refugees. America is a country built by asylum seekers, refugees, and economic migrants — so much so that we sometimes take that too much for granted. I didn’t even know, for example, that Google co-founder Sergei Brin, maybe one of America’s most famous entrepreneurs, only came to the United States in 1979, with the help of the Hebrew Immigrant Aid Society.  Sergei and his family fled the Soviet Union, where they’d been facing growing anti-Semitism and persecution.

We often note that Albert Einstein was refugee from Nazi Germany who had a huge impact on American scientific, intellectual and political life.  He worked tirelessly on behalf of Jewish refugees, making visa applications and vouching personally for many refugees.  And if science isn’t your thing, one of America’s most famous basketball players, Luol Deng, who was a two-time NBA All-Star fled what is now South Sudan as a refugee.  Deng has spearheaded a number of initiatives aimed at bettering the lives of refugees around the world.  He declared:  “I am a proud refugee. It’s important that we remember to humanize the experience of others. Refugees overcome immeasurable odds; relocate across the globe, and work hard to make the best of their newfound homes.”

And, he’s not famous yet, but one of the first graduates of this program, Theogene Baravura, who worked as the inaugural Diploma Coordinator, is now teaching in the United States, at Brophy College Prep in Arizona, shaping young American minds!

So with a nod to the refugees that made America great, I am pleased to be able to announce today that the United States will provide a grant of $23,442 to JRS to provide alternative energy sources like briquettes and energy-saving stoves for refugees and host communities around Luwani Refugee Camp in Neno District. I want, too, to acknowledge the welcome that Malawi has provided for refugees from across the continent.

What you’ve been through as a refugee is your foundation.  The diploma you’re receiving is both newer, stronger foundation and a new beginning. It’s particularly special because it was earned according to the Jesuit Refugee Services’ core values of serving, advocating, and accompanying.   The value of “accompaniment” is the one I find most special, broken down as it is into compassion (availability, empathy, loyalty, and perseverance), solidarity (commitment, community, faith and cultural sensitivity), hope, dignity and equality, friendship, and justice.  Accompaniment is the first step to service.  I know that you will continue to hold these values of service, advocacy and accompaniment close to your hearts, that wherever you are resettled, or God willing when you return home, and even now in camp, you will think of ways to use your diplomas — your education, the intellectual rigors that you have developed — to make the camp, your communities and your countries better places for the people who live there.  Some of you already have:  Remy’s TakenoLAB, Touusant is getting attention from American multinationals like Microsoft; I’m so moved by stories of Mark’s school for children with disabilities; and I’ve already been very public about how I’m a fan of  Alain and Fredy’s Salama Africa.

Your work may even make it so there will be fewer refugees in the future.  For if we are to stem the global refugee tide, we must confront the drivers of displacement.  We must work to address conflicts through political settlement, security sector reform, economic justice and diplomacy.  We must insist on greater investments in development and education and democratic institutions—the lack of which fuels so much of the instability we see in the world.  And we need to continue to speak up for justice and equality, and insist that the universal human rights of every person are upheld, everywhere.

I want exert the commencement speakers’ privilege and offer a few words of advice:

So, HEM Dzaleka Liberal Studies Diploma graduates, go and do great things!  Congratulations on your remarkable achievement.  I know it will be the first of many.