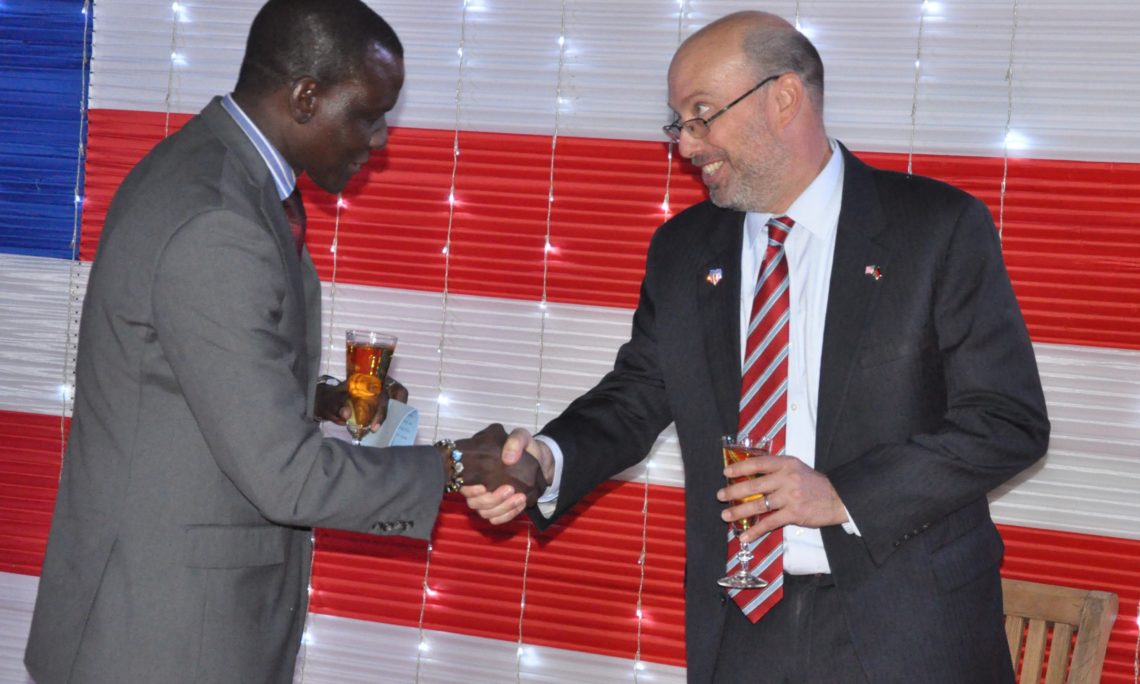 And please at the top, let me “protocol” the U.S.-affiliated companies who made generous contributions to today’s festivities.  A really sincere thank you to:

Thank you for your support and for embodying American business practices in your Malawian enterprises.

I also would like to thank the Polytechnic in Blantyre for lending to us the mock up of the Apollo lander on display tonight.  This model normally stands at the Polytechnic in recognition of U.S. support for its construction in 1963.

I am truly honored to have so many friends here to celebrate America’s 243rd birthday!

The theme for today’s celebration is the 50th anniversary of the Apollo 11 landing on the Moon.

On July 16, 1969, just past lunchtime, the United States hurled a giant Saturn V rocket carrying the Apollo 11 spacecraft 240,000 miles to the moon.  The rocket was more than twice the height of the President Walmont hotel in Lilongwe, and the Apollo 11 modules weighed more than eight full-grown elephants.  U.S. astronaut Neil Armstrong became the first person to step onto the lunar surface on July 21, and together with his crewmate Buzz Aldrin, they spent 21 hours on the lunar surface before blasting off on their long journey back to Earth.

This amazing feat was the most dramatic milestone in what had been a 14-year Space Race, during which the United States and the Soviet Union engaged in a massive scientific competition the likes of which the world had never seen before.

President John F. Kennedy had committed the United States to reaching the moon nearly a decade before, when he said:

The United States accomplished this historic, epoch-changing goal because it was not afraid to think big, set ambitious goals and go for them.

To this day, when we say “to shoot the moon,” we refer to launching an audacious plan to achieve historical new heights of success.

In the same spirit, many Malawians have made outstanding contributions to science and technology, and tonight, I’d like to mention some of them.

Aeronautical Engineer Dr. Cedrick Ngalande is a former NASA fellow with a PhD from the University of Southern California who currently works for Lockheed Martin Space Systems Company and who has published several scholarly papers on “microscale thrusters using pulse optical lattices”.

Computer scientist Rachel Sibande is one of the founders of mHub, Malawi’s first technology hub and incubator for innovators and emerging entrepreneurs.  In 2018 the Next Einstein Forum awarded Rachel $25,000 (K18 Million) for innovative ideas at its Global Gathering in Rwanda.  Most recently, Rachel and mHub offered crucial technical assistance to the 2019 Election Situation Room, which tracked issues during the May 21 elections, thereby making an important contribution to the integrity of the elections.  Rachel is also an alumna of the U.S. government’s YALI Mandela Fellowship.

Another YALI Fellow, Dumisani Kaliati, is busy launching his own aircraft into the skies – on a micro level.  He founded an engineering startup that manufactures drone aircraft, which are going to deliver medicine and testing materials for HIV testing of infants in hard to reach rural areas of Malawi.

But innovation has no age and does not need to be born from the corridors of academia. Take for example Gift Wyson, from Phalombe.  Despite being only 16, Gift has built an electronic machine that works as a money auto-teller, photocopier, wind-vane and chemical tester. I also recently heard about another young inventor from Wimbe in Kasungu, Madalitso Phiri who, without any formal training, developed several electronic systems from materials collected locally in his area.  One of the electronic innovations he has come up with is a wave switch, which can be used to control a number of electrical machines.

And I could not end this list without mentioning William Kamkwamba, the boy who harnessed the wind, now a full blown engineer with a Degree from Dartmouth College. He also grew up in Wimbe in a maize-farming family and had to drop out of primary school because he could not afford the tuition fees. But William taught himself how to make a wind-powered windmill based on information from a U.S. donated book in his local library bringing electricity to his home, which allowed he and others to have light to read by, when other villages were still in darkness.

With two thirds of its population below the age of 24 and still low but rapidly increasing internet penetration, Malawi has increasingly technologically savvy human talent, which it can use to build a better future. The United States is willing and able to walk with Malawi as it builds the technological know-how and infrastructure to spur engineering and scientific advancement.

For example, in providing electrical power to move the engines of innovation.  Millennium Challenge Corporation Compact investments have connected 200,000 more households to the upgraded and expanded electricity grid, which is now strong enough to take on new power generated locally or purchased from neighboring countries.  Malawi is poised to sign a second MCC Compact addressing another key constraint on economic growth.

To keep with the space exploration theme and to counter the idea that technology only serves complex problems, anyone who saw the blockbuster movie The Martian, where Matt Damon plays a stranded astronaut struggling to grow food on the barren Martian soil, understands that food security is an issue that transcends the earth-space boundary.

U.S. Government programs, for example, have helped Malawians embrace simple yet potentially transformative innovations, like PICS bags that dramatically reduce postharvest losses, and micro-drip irrigation that can double or triple crop yields. These technologies can help families achieve important goals, such as becoming food secure and helping to keep their children in school.

Together with Malawian agricultural research institutions, w e are helping Malawian farmers adopt improved seeds that have the potential to move Malawi from food aid dependency to regional food exporter. These seeds include state-of-the-art biotech varieties with desirable traits like drought resistance, disease resistance and the potential for significantly increased yield.

But in order to meet these dreams, to attain Malawi’s own “Moonshot,” this great nation must commit to creating the environment that nurtures innovation, rewards entrepreneurship and ensures accountability. We encourage the Malawian people to embrace technological change, be courageous in setting priorities, and fully implement solutions.

To attract the private sector investment needed to move up the value-addition chain, modernize infrastructure and scale up local innovations, over the next five years, the government must maintain tight fiscal policy and preserve macroeconomic stability.   To find funds in the budget for development, economic growth and technological advancement, the government must reform inefficient parastatals and programs like the FISP that are not achieving their objectives and drain resources. Fully empowering and funding accountability institutions will ensure that funds budgeted for education, youth development and research are not diverted along the way.

But, committing to necessary reforms is not enough.  Those in power must implement those reforms.  Only effective implementation will unlock, invigorate and sustain the dynamic potential of the Malawian people.

And Malawi also needs leadership from within and without government and from the Administration and from Parliament.  Our space program succeeded because of the steadfast dedication of Presidents Kennedy and Johnson.  But it also succeeded because of bipartisan support from Democrats and Republicans in Congress and around the country, regardless of which party was in power.  Malawi, too, needs to bring together supporters of all political parties in common cause and in mutual respect to attain its own “Moonshot” – rapid, peaceful and sustainable development.

As I wind up my remarks and my three wonderful years in Malawi, I want to reiterate America’s partnership with Malawi.

The United States believes in Malawi.  We believe in Malawi’s success, and we are committed to invest in that success to help make it a reality.

So now please join me in raising a glass to His Excellency the President of the Republic of Malawi Professor Arthur Peter Mutharika, to the steadfast U.S.-Malawi partnership, and to the prosperous future of all Malawians.