In March, 2020, I once took an overdose of my ART with the intention of taking away my life, my father has been a source of trauma to me” testified Sara.

Sara has been facing emotional abuse from the father. Sara (not real name) is a 16-year-old and was diagnosed HIV positive at the age of 2 in the year 2005. She lives with her parents and younger brother (13 years) who are both HIV positive. The father had been abusive to the family. He could beat her mother and force her (Sara’s mother) to have unprotected sex despite being instructed otherwise at the clinic. The father was also verbally abusive to the children and constantly telling them that he didn’t care whether they lived or died. All these acts used to shock Sara. 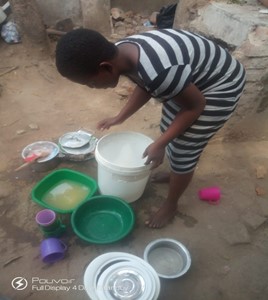 Noting the intense of emotional abuse, Lilongwe OVC program recruited the family in November, 2019 and has been visiting the household to provide counselling to Sara and the family. The Case Care Worker linked the children to Chigoneka Y+ to receive intensive psychosocial support and deal with stigma.  Sara’s father has been undergoing basic counselling provided by the CCW and adult support group members.

With stable psychosocial support and adherence counselling Sara’s Viral load is significantly changing. Viral load reading of January 2020 was 1,298c/ml from 4,861 (November 2019).  Sara’s father has since stopped being abusive to his family.

LLOVC program linked the family to Village Saving Group and they have since started a business after taking a loan from the group.

Both Sara’s mother and brother have reported a low viral load (LDL) and the Case Care worker continues to support them with counseling and reminding the family to go for the scheduled Viral Load test on 11th December 2020. “I am ready to go back to school once they open, I am now feeling fit” said Sara a Form one Girl at Chigoneka Community Day Secondary School.

The family is now at peace and improving in areas of their health and economic wellbeing.